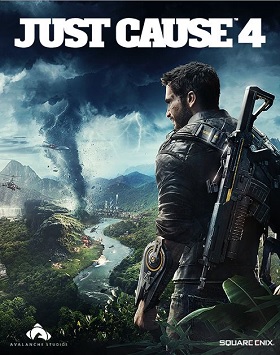 It's been exactly 14 years since the debut of the original Just Cause on the PS2 era of hardware, and while the following sequels improved on that concept by taking advance of newer generations of hardware with Just Cause 2 on the PS3 and Xbox360 and Just Cause 3 on the current generation of hardware, allowing the developers to take a giant leap in terms of what Just Cause's open world can achieve. With that being said Just Cause 4 is the first one that feels like an unnecessary step in many ways, making it feel like an extension to Just Cause 3 instead of a brand new experience. If you have played any of the previous games in the franchise you already know what this game is about, there's a new island with a new dictator that needs the sweet democracy of Uncle Sam brought in, which is why after the events of Just Cause 3 Rico is approached by Mira Morales, a native of the island of Solís, who convinced Rico to help her get rid of Oscar Espinosa, the villain of this story, and put a stop to Project Illapa, a weather control device that allows Espinosa to protect his military bases and ultimately his control over the island using all types of storms. Setting foot on the island Rico discovers that his father used to work on Project Illapa before his death which ignites enough flames inside Rico to motivate him to get to the bottom of this situation and in typical Just Cause fashion starts a revolution against Espinosa and The Black Hand, the private military also appearing in Just Cause 3.

One major focus point in Just Cause 4 is the story, which has been treated superficially in previous games, but this time around you have more background story on Rico as a character, his family and his departure from the Agency, more main missions overall and the DLC focusing on even more story content in what seems to set up the ropes for the inevitable Just Cause 5. While there is an overall story arc that unifies all four games and Rico's adventure you could probably ask any Just Cause fan about the story and they wouldn't be able to list more than a few general pointers because Just Cause is mostly about unhinged chaos and less about the repercussions of it, which is why Just Cause 4's focus on story feels weird. This would've been a welcome addition if the plot was a revolutionary turn point for the franchise, but instead it's just an extended version of what you've seen already with the superficial dialogue from the previous games still present here. Even if there's more of it overall, the whole dictator removal plot motivation feels weaker here, mostly because the dictator barely shows up and for most of the time you're recklessly killing waves of enemies without any context.

The island of Solís is still an enormous place with lots of things to do, as a matter of fact it is bigger than Medici from Just Cause 3 by quite a lot, but it never feels like it because there are less named locations and less things to do around those locations and completing everything for all the achievements took me less time than both Just Cause 3 & Just Cause 2 despite the longer story and larger map simply because the side content included in the previous games has been drastically cut for this forth entry, with only three types of side activities given to you by each one of the three main allies recruited by Rico. This means there's less repetition in the side activities, although some of them such as the Wingsuit challenges still get repetitive quite fast, especially if you're only doing that for a while since there's over 100 of them. On the other hand there are other types of activities that I've found quite enjoyable and that never overstayed their welcome such as locating the 12 tombs for Javi, but for every new concept introduced there's 2 others recycled from previous entries in the franchise. On top of that, the locations around Solís never feel like places you've never seen before because a lot of textures, objects and overall design elements from Just Cause 3 have been reused here, so even if you're in a different place, it still feels like Medici every step of the way.

If wacky experimentation with hilarious outcomes is why you play Just Cause this is one element of the game that you won't be disappointed by as it improves on Just Cause 3 in every possible way, now having loadouts for your grappling tools to which you can assign up to three powers that can be activated and combined for some truly amazing feats. You can assign one power to each loadout to activate by default, with the other 2 being activated by pressing or holding the up key on the D-Pad and you can also switch between loadouts on the fly without having to open up any kind of menu. Powers vary from things like adding boosters to flying air balloons or retractors and each one can be configured with 3 levels of power: low, medium or high, which opens up even more opportunities for crazy stunts and lots of possible combinations for chaos and tricks. What is disappointing is the lack of challenges designed to take advance of them since you can finish the entire game without using a single grappling hook power and with more missions it feels like a missed opportunity to insert those elements into the mission design, as a matter of fact the only places where you'll be forced to use them are some vehicle challenges, which are optional and quite repetitive.

As mentioned before even if the map is larger and you now have more tools at your disposal than ever before, Just Cause 4 fails at making fun challenges out of them since most of the main missions consist of reckless shooting against dumb enemy AI and the side content has been restructured in a way that feels like a major step back. Instead of having boxes and red stuff to blow up in each location like the previous games, each location here only has a couple of challenges which are either stunts, wingsuit courses or vehicle challenges where you must pass through a ring in a specific vehicle, usually located nearby. There's over 200 of those and aside from that you only have the main missions, the tombs, some short side missions from each ally and if you also have the DLC, a couple more objectives scattered around the map. This makes reaching 100% completion an easier feat, but at the same time it eliminates the collectathon element of the game that attracted so many people to the franchise previously. Instead of finding upgrades, new weapons and vehicles around the world you now unlock them either by completing those 200+ challenges or by increasing your chaos level, but since the motivation to blow up stuff outside the missions is gone, I found myself creating less chaos than in previous games and not surprising, the achievement for reaching chaos level 14 was the last one I had left after I've completed everything else, so creating chaos which is the main attraction of any Just Cause game is now a side objective.

The weather control system is what Avalanche Studios heavily promoted for the launch of this game and while it is a great feature to have, it is restricted to only a couple of areas and only to the type of storm native to that area, so in the desert you can only have sandstorms and only around the predetermined area. While during missions is when most of those storms will be used and the liniar structure of the objective ensures you stay in the storm, once you get back to the open world you realize how little impact those actually have on gameplay. After capturing a base used to summon a storm in that area you can activate and deactivate the storm in that area at will, but since having it active makes everything in that area harder to do, I had no reason to ever turn it back again and aside from allowing you to wingsuit for a longer period or gain some altitude using the parachute, they don't really do anything; you can't die inside them, you don't have any new gameplay mechanics if you are inside one and for most parts they just make things more difficult to see without providing any refreshing gameplay ideas.

JC4 looks like Just Cause 3 in every possible way, from the many textures, landscapes and objects reused here to the similar graphical quality overall, this feels more like an extension to Just Cause 3 rather than an entirely new thing. The map is new, but looks way too similar to Medici, the locations are lacking details and landmarks and everything else from visual effects to animation is pretty much similar to Just Cause 3, with maybe a few improvements here and there. The NPC AI is still just as dumb as it was in previous games, with NPCs often walking into walls, getting absorbed into the ground or getting stuck in debris. One thing that has been improved is destructibility, with some buildings that can be blown up and most objects being able to interact with your grappling hook, so even if there's no incentive to create a lot of chaos, if you do want to do it just for the sake of it, a lot more stuff can now be blown up.

The voice actors have once again been changed, with Orion Acaba replacing Kevin Collins as the voice of Rico Rodriguez, but funny enough his voice sounds very similar to Kevin's take on Rico, so it still sounds like the character you're used to and if you didn't look it up you might not even notice they changed the voice actor. Side characters have also switched voice actors, with Bradford Hastings taking on the role of Sheldon and new actors being brought in to voice the personalities of Solis, with the most prominent one being Elizabeth Maxwell taking on the role of Mira. The sound effects, like a lot of other things, have mostly been recycled from Just Cause 3, but the most significant improvement when it comes to audio is the addition of radio stations, so you can now listen to music when inside a vehicle. Most of the soundtrack is made up of spanish songs which makes sense considering the location in which the action takes place, but I still wish there was a bit more variety not only to include more international songs, but also different genres.

Finishing the main story takes less than 25 hours, but even with major changes to its side content structure there is still a lot of other stuff to do in Just Cause 4, from challenges to tombs and even just experimentation with your grappling hook powers, however overall the amount of content is lower than Just Cause 3. If you are the type of player looking to platinum this you're looking at about 60 hours of content, but a lot of it is repetitive challenges with the interesting missions far in between everything else.

If you liked Just Cause 3 here's more of that, but downgraded in many ways, which I don't understand why especially since people praised the improvements and formula in JC3. There are some new interesting additions like the grappling hook tools and the weather system, but sadly those are barely used and when they are, it's always the basics; it feels like Just Cause 4 has all the tools necessary to take the next step for this franchise, but never bothered to make challenges and missions in which to use them in fun ways, and that is this game's main problem.