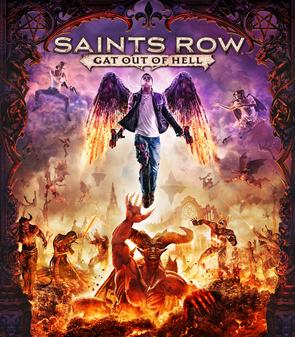 Saints Row: Gat Out of Hell is a standalone expansion to Saints Row IV, following the events of the previous installment, with the President being sucked into hell via an Ouija board, moment when fellow saints Johnny Gat and Kinzie Kensington decide to go in after him. Ending up in hell you find out that the reason behind the President's kidnapping is Satan's desire to marry him to his daughter, so you decide to wage war against him in the saints style: by killing and exploding everything that moves. Usually the story in Saints Row games is there just for ridicule and amusement purposes and it was never meant to be taken seriously, but even by those standards the story of Gat of Hell seems like an extra step in order to just murder more demons as there are only a few select missions that progress the campaign and the majority of the game rests on the shoulders of side content, which in most cases is a reskin of side activities from Saints Row IV. Just like in the previous game, your main objective is to take over the entire city by completing side activities which range from more traditional challenges like Torment Fraud which is just a reskin of the popular Insurance Fraud minigame to more straight forward objectives such as taking out multiple missile shooting spires, which gets really repetitive after a while.

You can play as either Johnny or Kinzie, but that's the only customization option available in the game as clothing shops and the Plastic Surgeon Store from Saints Row IV are not present here, so you will be stuck with the same character design for the entirety of the game, making progress and leveling up feel insignificant, especially since the most useful power upgrades can be unlocked in just a few hours. Since the main campaign can be completed in around 3 hours if you don't dabble into the side content too much the game relies on challenges to keep you around for a while longer, but aside from a few exceptions that I genuinely enjoyed completing since they require you to attempt different things that you normally wouldn't, most of the challenges are basic grinding activities such as get x amount of kills with that weapon or that power. Even with its ridiculous premise for a game, Gat out of Hell misses the mark on delivering jokes and comedic moments in a way that previous installments haven't, as there are only a few cutscenes in the game and the jokes are mediocre at best.

If you have played Saints Row IV you pretty much know what you're signing up for since Gat out of Hell uses the same engine and even a reskin of the old map of Steelport to make it look more like hell, which is probably different from any other person's interpretation of hell, with damaged cars driving around and demons instead of pedestrians. The combat is a combination of weapons and 4 distinct arcade powers, each with its own set of 3 different elemental effects that you can switch between at will; this makes killing demons and exploding stuff fun at first since there are so many different combinations you can use, but it will get repetitive by the end if you decide to stick around for all the challenges, especially since a lot of them require way more kills that you normally would accumulate during a normal playthrough, making the post credits gameplay a constant grind. In addition to the previously mentioned active arcade powers, you also have two passive powers: Super Sprint and Flight which you will use at all times since that is your main method of traversal across the city of New Hades. You can still drive cars around like you did in previous games, but it is clear that's not how the developers intended you to travel at all, since there are no radio stations when you travel by car and they also break and explode way too quickly, although that part was probably intentional in order to cause more chaos.

There are only 5 main categories of side activities: Hellblazing, Torment Fraud, Salvation, Mayhem and Pledge Rush, all of which are just reskins of previous activity types in the series, with a few more activities like revenge or treasure chests appearing later on if you decide to stick around, but even with all those in mind the gameplay does get repetitive really fast since there are no missions to tie in all those moments together and as mentioned before aside from the beginning, middle and end missions of the campaign, the side activities form up the majority of the play time. When it comes to weapons you have your traditional sniper rifles, shotguns and SMGs, but by far the most fun weapons to use are the 7 Deadly Weapons which will replace each of the 7 weapon types that you can carry at a time. Things like the Essence of Sloth which is an armchair with gatling guns strapped to the sides fit really well into the universe of Saints Row and are far more fun to use than the traditional weapons, however each one of those has to be unlocked by completing a specific challenge so they won't be available from the get-go.

You can also play the game in Co-op, but compared to Saints Row 3 or Saints Row 4 where missions were made more challenging or slightly different in Co-Op, here it just feels like an addition for the sake of having it. All activities will work the same way and there isn't really a reason to play this game in Co-Op unless you wanna bring a friend along for the ride or that one achievement that forces you to try it. There are also a number of bugs and technical issues that I have encountered during my 30 hours spent with this game, ranging from things like getting stuck in the environment or falling through the map to more serious issues like crashes which happened quite often, especially in Co-Op.

Since it's built on the same engine and also the same map, Gat out of Hell looks exactly like Saints Row IV, which isn't a good thing since SR4 was already outdated graphically by the time it came out and the two years in between those games only made that difference more noticeable when compared to other titles from 2015. It's still something pleasing to look at, mostly because a lot of times your screen will be covered by the many weapons and powers effects which shine through, but when focusing on other aspects of the game such as character details and animations, Gat out of Hell looks like something that came straight out of the PS3 era. The city of New Hades still looks great, especially since a lot of times you will just fly above buildings making your way to the next activity, but it does feel empty in a lot of areas; for technical reasons I presume, only a few demons spawn in each location with more gradually spawning as you stay in place so when flying above the streets, a lot of them will feel abandoned, which doesn't fit well with the many shiny billboards that remained from the map of Saints Row IV.

Since radio stations have been completely removed, the soundtrack is considerably smaller, with only a few tunes playing during key moments in the game, leaving the rest of the atmosphere to be covered purely by the hell traffic sounds and the many effects that your weapons and powers produce. Those don't sound necessarily bad, but just as everything else, a lot of audio assets from Saints Row IV have been reused here, from weapon noises to power effects and even car engines. Daniel Dae Kim once again reprises his role as Johnny Gat and Natalie Lander goes back to being Kinzie once more, with the rest of the allies adding to the cast of characters. In addition to Vlad the Impaler, Shakespeare, Blackbeard and the DeWynter sisters, the only other characters are Dane Vogel, your guide to hell 101 played by Jay Mohr, Satan and his daughter.

If you're only here exclusively for the main attraction you can reach the end credits in around 2-3 hours, but if you are the completionist type looking to complete all challenges and platinum this game, you can expect the game to keep you busy for 20-30 hours depending on how fast you grind those challenges left over after finishing the game. I have finished all of them myself but even with all of the weapons unlocked and upgraded and all powers at my disposal, completing every challenge felt like a grind that's just not enjoyable and looking back on it, I probably wouldn't do it again. Co-op might be an incentive to replay the game alongside a friend, but aside from having a companion through the journey that doesn't change much since all the activities remain the same and there's nothing else to do that's exclusively co-op.