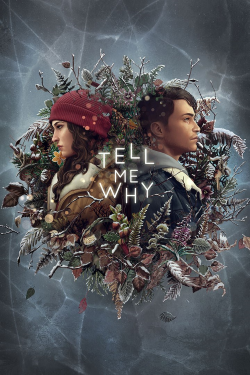 Famously known for their previous games in the Life is Strange franchise among a few other titles, Dontnod Entertainment seems to be keen on moving forward with their third-person interactive adventure formula popularized by Life is Strange and implementing it in new contexts including the story of Tell Me Why, a brand new title conceived and developed by Dontnod that could've been easily adapted into the Life is Strange franchise due to its similarities in story structure, character development and the use of supernatural powers, but they instead opted to spin this off as its own thing which might have worked in this game's detriment when it comes to copies sold. If you have played any of Dontnod's previous games you pretty much know what you're getting yourself into as the format of the game is very similar, even though instead of having 5 episodes per game like we've been accustomed to from Life is Strange 1&2, this game only has 3 episodes of similar length to those features in previous games, each one of them taking around 3 hours to complete, so the entire game can be completed in 9-10 hours.

You play as twin siblings Tyler and Alyson Ronan, born as the daughters of Mary-Ann Ronan in the fictional town of Delos Crossing, Alaska, now being reunited after 10 years of extreme social distancing, following the events back when they were kids which resulted in their mother being murdered by Tyler in what was concluded as self-defense. Following that event, Tyler was sent to the juvenile detention center, while Alyson remained in the custody of policeman Eddy Brown who later adopted her, so they both grew apart in different lifestyles which makes the reunion a multi-step process as the twins relearn to trust each other and rediscover their superpower to talk to each other telepathically and experience visions of past events when together, something they thought was only in their imagination as kids, but now all grown-up is proved to be real. As for the murder of their mom, don't worry that is not a spoiler as it's made clear from the very beginning and the story instead focuses on the reasoning behind their mother threatening Tyler which resulted in him killing her in self-defense. As you uncover more and more of what happened that night all those years ago through visions as well as talking to the other characters of Delos Crossing, you will start to piece together different theories and even though the story does seem to be headed in a certain way by playing through the first episode, it does radically change from the second episode onwards, shifting the perspective of what you thought happened in a different direction.

Now let's talk a bit about the elephant in the room which reviewers seem to either completely bypass, probably out of fear of saying the wrong thing and being canceled or talking only about that, neglecting the actual game and coming out as complete bigots in the process. Born as twin sisters Alyson and Ollie, it is made clear from their early childhood that Ollie is struggling with gender identity issues and later on, during his time spent at Juvie he enters into a gender reassignment program that completes his transition, becoming the man he always wanted to be. Even though by only playing the first episode it will seem like that is the main point of the story and the whole plot is built around Tyler's gender transition, that is false since as I've mentioned before the direction of the story will drastically change in the second episode. That being said it does make you wonder why so much emphasis was put on that transition in the first episode and some moments feel like they've been forced in order to impose a certain narrative, but I will say again that is not the point of this story so if the whole transgender topic triggers you, that's something I can't help you with and you should find better things in this world to focus on instead of trying to dictate how other people live their lives, however, I do intend to make an in-depth video at some point talking about some of those things that I couldn't do here without spoiling the story.

Also similarly to Life is Strange there are key moments where your decisions will influence the outcome of the story, but this only applies to the ending which has different outcomes depending on the bond between the siblings, which is influenced by the decisions you make throughout the game. Growing closer together, making jokes, and reliving memories together will either grow or distance the bond between the siblings and depending on those stats a certain ending will be triggered once you've reached the final chapter. Aside from that your decisions barely have an impact, as similar to Life is Strange 2 only some dialogue will be changed depending on your responses, with the rest of the narrative staying the same until the very end. Since you play as both characters, the perspective will be switched a few times over the course of one episode, but for the majority of the game even when you play as one sibling the other one will be next to you, so this is in every way a tale about both characters where the only thing you get to decide is the ending.

Gameplay will also be very familiar to those who have played Life is Strange as it's mainly focused on dialogue, exploration and puzzles, with the one unique gameplay mechanic being the visions where you get to see silhouettes of yourselves and other characters in past memories and sometimes get the option to choose between whose vision you believe when siblings have conflicting interpretations of a certain event. In terms of exploration even though there aren't as many locations to explore as some of the other games as the entire story takes place in Delos Crossing and you will revisit some locations multiple times throughout the game, you still have the traditional point and click mechanic in which the siblings will commentate on certain items when you click on them, giving you a description, talking about a memory or making a joke. Dialogue is also similarly structured, usually having 3-4 options to pick from when responding, with the optional talking points added in there if you want to find out more about a character or a certain topic.

In regards to the puzzles most of them are centered around the Book of Goblins, a compilation of stories written by Mary-Ann in order to entice the imagination of the kids when they were young, but as it turns out a lot of those stories have hidden clues inside them, so you will often have to read through a few pages in order to get to that one small detail you need to progress forward with a puzzle, but the stories are well written and kid-friendly so you could even read some of them to your own kids and see if they too will start an underground goblin base under your house based on them. The complexity of those puzzles is variable, with some of the more difficult ones being found in the final episode, while also being optional, so just getting through the main story will only require you to read a few paragraphs where you can easily find that one thing you're looking for quite quickly and even more some of them have a skip option, such as opting to break the lock of a door instead of solving the puzzle to open it.

Even the style of the graphics is very similar to Life is Strange, so if the look of those games appealed to you, this one will too, however as mentioned before you will revisit locations quite often, so there is less variety when it comes to exploration as nearly half of the game will be spent in and around your house as well as the local supermarket. There is also less polish in some areas, especially if you're the type of player looking into every corner, where you might notice some lower resolution textures and backgrounds. In the visual effects department, the quality is similar to Life is Strange 2, but due to the nature of the game you won't be seeing any explosions or out-of-the-ordinary visual surprises.

Tyler is voiced by August Aiden Black while Erica Lindbeck takes on the role of Alyson and they both do a fantastic job portraying their characters, with the cast of side characters such as Eddy being voiced by Martin Sensmeier and Mary-Ann voiced by Emily O'Brien adding to that. The characters in this game are what make Delos Crossing an immersive and believable location, while also portraying the Alaskan lifestyle with all its advantages and disadvantages. The dialogue although a bit forced and nonsensical at times is mostly well written, while the soundtrack fits the game perfectly, but that shouldn't be a surprise considering Dontnod has always done a great job picking out the right soundtrack. Audio quality and audio effects overall are similar to Life is Strange, but there are a few things that deserve a special mention here such as the sound of the lake water splashing against the rocks on the shore or the wind blowing through the trees.

There are collectibles in the form of carved wooden characters from the Book of Goblins and they even have a use in the final chapter if you find them all, but aside from that, the main game is your entire package. Since there are multiple endings, a second playthrough might interest some people, however you can see the other ending by just replaying the final episode and taking specific decisions to lead you to your desired outcome. The game is indeed shorter than your usual Dontnod adventure, but the quality of everything is still up to the standard.

Tell Me Why is yet another interactive adventure from the brilliant minds at Dontnod Entertainment, so if you like this style of games you will most likely enjoy this one too. There are some questionable decisions when it comes to the game's narrative and some of the dialogue, but that shouldn't overshadow the amazing story behind this game and the trademark Dontnod quality of production. If the transgender part of this game is what keeps you away, number one stop being a bigot and number two, in the end, it doesn't really matter to the story.