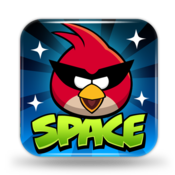 By this point probably everyone knows what Angry Birds is and there's a slight chance you already have it on your iPhone or Android device. Angry Birds Original was first released in 2009 and since then it has become a worldwide phenomenon, but with the release of Angry Birds Rio everyone felt that even the gameplay is addictive, this can't go on forever, and releasing another game just like the one before won't work anymore. This isn't the case of Angry Birds Space, which takes place in well, obviously, space; everything has been adapted to fit the space theme, from the newly designed birds, to the use of planets, gravity and other space objects. When it was first announced everyone thought the game would suck, simply because no one could imagine catapulting birds into space would actually work, but surprising enough it does more than a great job. On the downside, the story of Angry Birds space is still presented via animations that pop up after a certain number of mission, which is okay, but put together it doesn't make much sense.

The core of the gameplay remains the same, but this time around key features have been modified in order to bring a refreshment to the series; you now have gravity, space physics and brand new modified birds for all those bored by the same powers some the original. Even thought the planetary gravity system is interesting added to series, it doesn't come without its problems, the outcome of the gravity effect is random, and doesn't follow the same effect that it should. Sending a bird through a gravity field can have a different outcome than the previous one, even though it was launched in the exact same spot, which can be frustrating if you need to get an accurate shot at something that already has a trajectory marked from the previously launched bird. You still collect golden eggs to unlock hidden levels, but this time around they've been created to simulate classics like Space Invaders or Brick, an awesome flashback from the classical era of gaming, and a superb idea to include in the game.

Even though this is the same engine, the space backgrounds look amazing, and the planets are detailed enough for a mobile game. The effects suffered some modifications as well to fit into the space theme of the game, and they look great. The problems with material collapse effects from Angry Birds Rio have been fixed, and seeing the gravity smash those into pieces feels satisfying as you can create chains of destruction from a gravity field to another.

Sound quality has been improved, and the effects changed, a fresh modification to prevent the same repeating sounds from the original. Effects produced by the birds while they're launched into outerspace are awesome, and everything else adds up to the space environment. The soundtrack has been changed, and it's pleasing to listen, even though you won't notice the best of it during actual gameplay, as it does again focus on the sound effects more than than the soundtrack.

Everything from leaderboards to star progress makes a return, but the biggest change comes in the form of the newly designed bonus stages, specially designed to replicate other huge hits from the classical era of gaming, and all of those are fun to play. On the other side, the amount of levels packed into the game is lower than previous titles, but still enough to keep you entertained for a while.

Angry Birds Space brings something new to the series, proving the fact that Rovio can bring new ideas to the series and keep it fresh for gaming on the go. While it's not as packed with content as the previous title, it's a fun game to play, and it's totally worth your attention if you were looking for something else in the Angry Birds franchise.