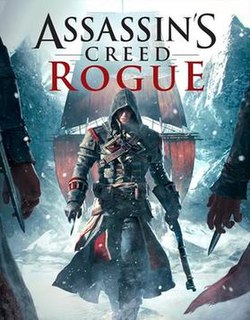 Released at the same time with Assassin's Cred Unity as a counterpart for the old generation of consoles, AC Rogue tells the story of Shay Patrick Cormac, an assassin turned Templar after a disagreement with the assassins' goals. The story takes place during the Seven Years War/French and Indian War, from 1754-1763, after the events of AC IV: Black Flag and before the events of AC III, placing this somewhere in between the two. This allows AC Rogue to grab a cast of characters from both games, making already familiar faces such as Black Flag's Adewale or AC III's Haytham Kenway an essential part of Shay's story in a way that makes logical sense.

Even with its many similarities to both of those games, Rogue is more than a copy of AC IV with a lot of cameos, but instead it uses its betrayal story to give more depth to the whole Assassins-Templars conflict that has been going on for centuries, probably more than any AC game has done before. The story sticks to the essentials only, constantly feeding you with plot-twisting moments that give you a better understanding of the Assassin's intentions compared to the Templars as well as Shay's role in that whole story.

Shay is more than a brainwashed assassin with templar ideals in his head and that's what makes him an interesting character to follow, but instead, skeptical about the Templars at first, you will follow Shay's story as he begins to understand and question the intentions of both factions until he is firmly convinced that his goals align with the Templars, moment in which it drags you with him to the Templar's side. Unfortunately, that whole sticking to the point concept behind the story makes it feel rushed, you never really get to know the other characters to find out the full story behind your actions, and even though prior knowledge from AC III and Black Flag helps you get a better understanding of what's going on, the game never takes the time to set the foundation of its new plot, but instead makes the whole story feel more like a resume of what a great adventure as an Assassin Hunter would be like.

AC Rogue is a sequel to Black Flag in almost every possible way, but that is best shown in its gameplay mechanics, as it relies strongly on naval battles, island exploration and plundering, just like its predecessor. The good part is that everything that was great to begin with in Black Flag is still here in a way or another, from the vast open seas with dozens of islands to explore, to the fort battles, naval battles, rich environments and varied activities, and they're all still entertaining to this day; however that is pretty much everything that AC Rogue has to offer, with little to almost zero new concepts or activities, so if you have played AC Black Flag before, you will only find more of the same.

Even if those are things that we have seen before, there is still a lot to do, as Rogue has 3 different areas starting with New York that acts as the main city and capital of everything, River Valley that is pretty much a reorganized version of the Caribbean from Black Flag and the North Atlantic area which is by far the most unique concept Rogue has to offer, as its icy oceans and snowy environments offer a unique experience not only on sea where icebergs can be used to your advantage in naval battles, but on lands as well as snow gives more room for stealth opportunities. In terms of weapons and tools, you have the traditional hidden blade, a variety of swords and pistols, throwing knives, the returning Blowpipe from Black Flag that can be used to take out enemies silently from a distance and the brand new grenade launcher that can fire a variety of different types of grenades such as shrapnel, berzerk or sleep, which in theory sounds cool, but it never really finds its use inside the game, since the Blowpipe can fire darts with similar effects, while keeping it silent.

Smoke bombs are an important part of combat, as your enemies will use them on you as well, but fortunately Shay is equipped with a mask capable of negating the effects on himself, and putting it on at the right time can turn a battle to your advantage. On the not so bright side, Rogue is filled with bugs and glitches, from things such as falling through the map to stuck enemies and other visual glitches, however reloading the last checkpoint usually fixes the problem so there's nothing fatal here, but they are annoying issues nonetheless.

Since it was built on the same engine, Rogue does not only feel like Black Flag, but it looks exactly like it too, and the fact that a lot of textures and objects have been reused here is clear, but since the action does take place in the same area and environment that's not necessarily something we should condemn. AC Black Flag was a beautifully looking game to begin with, and Rogue is certainly on the same level, but compared to its next-gen counterpart, AC Unity, Rogue is nowhere near.

The islands are diversified enough to feel unique and recognizable, but there are no landmarks that feel memorable like in previous AC games where sync points were usually a great example of real-life monuments or at least great pieces of architecture; in Rogue those sync points are just towers made out of wood or trees barely hanging on a cliff. The characters look realistic enough and the effects do their job to fit in the environment, but don't expect anything breathtaking since the game was built over the assets that already existed from Black Flag.

Steven Piovesan even though a fairly inexperienced actor does a great job as the voice Shay Patrick Cormac, while actors such as Adrian Hough and Tristan Lalla reprise their roles as Haytham Kenway and Adewale respectively from the previous titles. The sounds effects are great, but just like the graphics, a lot of assets from Black Flag have been reused in here, and those who have played the title before will almost immediately connect with the familiar ship sounds and effects.

The soundtrack is composed of some oldies as well as some brand new compositions, and there are some great new shanties in there as well for you to listen on the long travels. The sounds of nature steal the show once again, as quietly sitting in the middle of a forest and listening to the combination of wind and animal sounds is a peaceful and very enjoyable thing.

You can probably finish AC Rogue within 12 hours if you only stick to the minimum necessities when it comes to side quests and activities, but if you loved those in Black Flag you will probably waste anywhere over 30 hours in total looking for every single collectible, completing all activities and unlocking all the swords, pistols and outfits. However, unlike the last entries in the series, AC Rogue does not feature a multiplayer component, so sailing alone looking for treasure is all you get this time around.

In terms of story telling, AC Rogue has an interesting premise that never really reaches its full plot depth potential as it often feels like it's rushing some moments, as for everything else it pretty much feels like an extension to Black Flag, so if you loved the previous entry in the franchise and want more of the same thing you won't be disappointed, but for those looking for something new, Unity is probably the better choice for you.