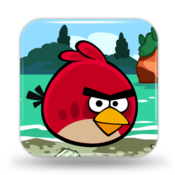 After the success of the original Angry Birds, people were madly in love with the concept and they were constantly asking for more, so Rovio started to release packs with season-themed levels; put them all together and you've got Angry Birds Seasons, a concept that was supposed to support all the upcoming holiday and special levels and more important, make them available free and instantly to everyone. The concept stays the same, and so does the story, but to be honest I wouldn't mind Rovio trying to actually tell a story during the game, rather than repeating the same thing over and over again. If it was possible to make something from an Italian plumber rescuing princesses and eating mushrooms, trust me, it's possible to unfold a story from birds catapulting themselves towards pigs.

The gameplay stays mostly the same, with a few improvements that consist in a larger inventory of materials and diversity, mostly because until now there are 14 level packs released with over 300 levels to enjoy and plenty of challenge to keep you busy for even more time than the original title did. Everything you loved about the original concept is still here, and still addictive, which is okay considering everyone loves Angry Birds and more of it can never hurt anyone; I just hope they won't push this over the limit and eventually come up with something different and new, until then however the gameplay is still fresh enough and it'll keep you entertained on the go.

This is still a mobile game built over the original engine, so don't expect improvements in this area, however the new materials and backgrounds look amazing, making packs like Halloween or Christmas really enjoyable, so you can be in the Holiday spirit while catapulting birds.

Same as the graphical area, the sound stays the same, nothing revolutionary has been done, the effects are basically the same ones used in the original, and even though there are more tracks to keep you chilled while playing, I still feel like there could have been done more.

Same as before, you still have leaderboards, and score tracking, with the ability to shoot your way up to 3 stars on all levels, but as all packs released until now are free, there are more than 300 levels to try, so it's a huge amount of fun, for a low price.

If you liked the original Angry Birds and still want more, this is the way for you; for the same low price you get more of Angry Birds, with the same awesome concept in a larger quantity.