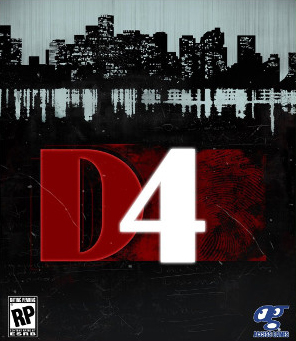 D4: Dark Dreams Don't Die is probably one of the strangest things you'll ever play if you choose to do so, but if you are a fan of adventure games with the main focus on storyline, you probably should. You play as David Young, a retired detective of the Boston Narcotics who now spends his time trying to solve the murder of his wife Peggy, after they both have been shot by a mysterious character whose name begins with "D". As David managed to survive the bullet in his head, he lost every memory of that night, but in exchange he obtained the ability to go back in time by touching mementos, objects that have been involved in a particular scene in the past, allowing him to go back in time to that same moment.

Aided by his ex-partner Forrest Kaysen, David manages to get his hands on some important mementos related to Peggy's murder, allowing him to travel back in time and solve different puzzles and side-quests along the way. What makes this story weirder than anything else you may have experienced before are the characters, as from the cat-woman Amanda who managed to move into your apartment without reason and without previously knowing you after your wife's death to the mysterious Roland Walken, the game is filled with strange characters that will constantly keep you engaged in the story and make you wonder which one of them is the one you're after.

The biggest disappointment in the story is that it ends too soon and without a proper closure either; the game follows an episodic format, however at the end of the season there are only 2 episodes plus the prologue, which can be completed in less than five hours. There are plenty of satisfying things to keep you preoccupied along the way as each side-quest will help you gather more information on each character and reveal their true intentions, but disappointing enough is the fact that in the end they don't really matter, as the outcome will always be the same cliffhanger ending no matter what information you gathered along the way and which one you thought to be the killer.

Originally designed as a Kinect game, the game made the transitions to controllers quite well, something that I strongly recommend if you're playing on PC with a keyboard and mouse in mind. Using your controller makes the game simple and entertaining to play, using basic movements and the right analog to turn around since the game always gives a 360 degrees view from each point. You will spend most of your time interacting with objects, but even in the most basic of things the game doesn't let you put the controller down as opening the fridge requires a quick turn of the right stick, turning the TV on requires yet another action to use the remote and so on. Even during cutscenes you will often be prompted to observe a certain object, gathering more information about it.

Observing is something you will do a lot in this game, especially if you're a completionist, as the game has achievements and rewards based on the amount of objects that you observe and interact with in each episode. Observing can sometimes be fun, as moving your hand over an object will give you a short description of what David thinks about it, and while this is an useful thing for important objects, it does become very repetitive for objects you will encounter often, such as credits. Among the objects that you will encounter, you can collect a lot of them, starting with the drinks that restore your vision, a power that allows David to highlight every useful object in his sight and food that will restore your stamina, which will slowly be depleted as you perform actions.

Apart from that you can collect credits, clothing articles and bandages to heal your wounds, but even so the world often feels empty of the objects someone would normally encounter in particular scenes, as every item that you can interact with is either food, stamina, credits related or part of the case you're following. The biggest highlight of D4 however are the fighting scenes, where you will have to quickly respond with basic movements and button presses in action-filled cutscenes that never seem to get boring to watch.

D4 goes for an anime look, which doesn't look bad at all and totally fits the weirdness and silliness of some of the moments the game will throw at you, especially those food eating sessions with Forrest Kaysen that have a special touch of humor. D4's biggest graphics-related problems are the lack of variety in environments as there are only three locations that you will visit for the entire game and the maximum resolution being locked to 1440x900, but even so D4 is not about being realistic or breathtaking, and for what it is, the overall design suits it well.

Ben Pronsky does a fantastic job as the voice of David Young, with other well-known actors in the gaming industry such as David Lodge, Carrie Keranen, Liam O'Brien or Chris Tergliafera completing that circle of believable voice acting that makes the characters unique and strange enough to be in mood with the tone the game wants to set. The soundtrack is amazing, especially the tunes playing in the background of each fight scene, but the sound effects could use a little more variety here and there.

As mentioned before, the game can be completed in less than five hours, but if you're a completionist going for all the achievements you will most likely complete it a second time. There are a lot of customization items for each character from some of the most popular gaming franchises such as Gears of War, Fable, Killer Instinct or Rock Band, but apart from choosing the ones you like to actually wear there is no reason to collect and buy all of them.

If you like adventures games with great stories and you're ready to experience a little bit of strangeness as well, D4 is the game you are looking for, however keep in mind that this is a story above anything else game, so don't expect any complex gameplay or longevity since the game can easily be completed in one session and on top of that the ending does make the entire thing more like a preview for something greater that is set to follow.