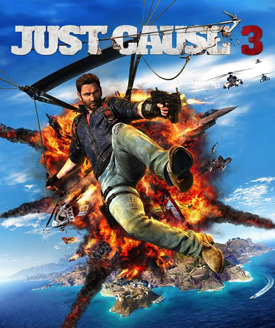 When I first played Just Cause 2 on the Xbox 360 I was left speechless at the vast open world and endless possibilities of creating chaos, all things that no one even thought were possible to achieve on the Xbox 360 hardware, and I felt the same thing once again when I first started up Just Cause 3 on PC. Just Cause 3 is a bigger, more ambitious project than its predecessor in every possible way, giving you more options to create chaos, and different strategies to approach each encounter, from helicopters to tanks, tethering buildings together and pulling them apart, a vast inventory of weapons, explosives and items, Just Cause 3 is simply a fun sandbox.

There's still a sense of repetition when played for a long time in one session simply because the overall objectives aren't that different one from another, as aside from the very few Main Missions you will spend most of your time traveling around the island looking for stuff to blow up and unlock more things as you move forward, but even with the different approaches in mind, the end objective remains the same, but Just Cause 3 is probably the type of game that you'll boot up after a day of work just to release some stress by causing mass explosions, and in that matter, there's plenty of things to blow up.

You once again take control of Rico Rodriguez, the infamous mercenary known for dethroning dictators and liberating exotic islands by blowing up everything standing in his way, this time returning to his homeland of Medici, a fictional Mediterranean republic that has fallen under the control of a military dictatorship led by General Sebastiano Di Ravello and it's your job to bring democracy back to the motherland, by destroying structures that would probably take decades to build in a matter of seconds, but Just Cause 3 is one of those open-world make your own adventure video games, so don't think about it too hard. On the other hand General Di Ravello feels like the series' most complete villain so far, as his personality will follow you around the island as you take down his propaganda speakers, run into his collectible tapes and fight his army, all helping you understand his motives and the way he managed to take control over the island, it's just too bad that the same amount of attention wasn't put in the Rebels or the overall world, as normal citizens will just awkwardly move from one point to the next and back instead of feeling a natural part of the world and their daily activities.

If you have played either one of the previous installments in the franchise you probably know the drill, as once again the story only serves as an excuse to introduce you to the mechanics and items of the game and then lets you loose in the vast island of Medici to use every weapon at your disposal to create chaos. Just like the previous games, you still have a group of allies that will assist you in taking over Medici and this time around also the Rebels which can be called to assist in taking over a base, making each location feel like a different approach rather than the same thing done in a different area of the map.

The reason behind the rebellion and the United States' involvement in Medici is the discovery of a new element called Bavarium which can power shields, vehicles and entire stations, allowing for some interesting combat encounters as this leads to Bavarium Tanks that are invincible at almost all times except a small few seconds window when the shield has to recharge, making later combat encounters also a matter of timing, as well as skill, but with the many options available at your disposal the game never feels too hard, as even if you die the buildings you destroyed stay destroyed and you respawn somewhere near the location where you died.

Gameplay is probably the main selling point of this franchise as blowing stuff up is simply fun and now there's more ways to do it than ever and the greatest part about that is that there's no right way to do one thing, leaving the player with a freedom of approach in each new discovered location. Obviously a lot of work went into the vehicles, as you can control anything from a simple car, to a van, a massive bulldozer, a tank and even a bavarium shielded helicopter. Those Bavarium based vehicles will be introduced later in the game, adding a new variable to your strategies, timing, as the shield will only be down for a few seconds giving you a small window to grapple onto the vehicles and steal them or taking your shot at destroying them.

On top of that there are major improvements to almost everything introduced in Just Cause 2, as you can now have up to 6 tethers to link objects together, as well as more vehicles, weapons and items for you to play around with. Then there's the wingsuit which allows you to travel faster and approach locations from above and if you also purchased the DLC there's a major improvement to it that makes it much more useful and fun to use. As mentioned before though, the best part about Just Cause 3 is its enormous open sandbox environment in which you can basically do anything that your tools allow you to, creating some interesting and fun moments and constantly discovering new ways to take down enemies, as well as entire buildings. Speaking of buildings, compared to Just Cause 2 where you had this enormous city to roam in which served as the island's Capital, Medici doesn't have anything close to that as the biggest town is probably only a small portion of the Panau City from JC2, and most of the island is just uninhabited space, which isn't exactly a bad thing since most of those places are filled with secrets and collectibles and even with the giant scope of the map in mind traveling isn't that much of a chore since you can use any vehicle to reach another location and there's also a fast travel option, but a more urban area is missed.

The few missions that are there are mainly to advance the story and introduce you to new equipment, but most of those require a certain area to be liberated first, so if you're looking to rush through this game only to see the end you might be a bit disappointed as the game forces you to liberate a huge chuck of the map just so you can advance with the story, but considering the fact that blowing stuff up is the main attraction of this game, you would probably want to do that anyway. It's been a few years since this game originally launched, but most of the reviews still seemed to mention the horrendous frame drops and technical issues, which luckily have been patched since and I was able to play on PC in 4K without any major technical difficulties, aside from the occasional frame drops.

Standing on the top of a mountain and looking down at the island of Medici will make you realize how big the island really is and the view is simply breathtaking, as each hill and each mountain feels like a natural part of this wonderful fictional island that Avalanche Studios crafted, all combined with man-made structures such as farms, cottages and on a bigger scale small towns and military bases. The even more fascinating fact is that from that top of the mountain you wouldn't even be able to see a vast majority of the island, not only because of its scope, but because this time around the map has a sense of verticality and scale as there are numerous caves and underground tunnels that can be accessed.

The animations can be a bit clunky sometimes as NPCs will bump into walls or get stuck in an object, but aside from the amusing moments those have few to almost no impact on the gameplay itself and luckily the cutscenes are top notch, with both Rico and his allies having state of the art facial animation. The explosions are the most promising visual effect as almost anything that could explode in this game can explode, creating some truly apocalyptic sceneries.

Voice acting has also improved in the third installment as Kevin Collins takes on the role of Rico Rodriguez, providing a more mature and experienced voice for our favorite US mercenary; joining him is a cast of experienced voice actors with Bill Lobley taking on the role of Sheldon and Armando Riesco providing the voice of Mario Frigo, as for General Di Ravello that role falls onto Jon Avner who does a great job and probably has the best written dialogue in the entire game.

On the sound effects side, you have what you would expect from a major triple A title, as each explosion and gun shot feels authentic and the nature sounds of birds chirping make the island of Medici feel like a place that could actually exist. The soundtrack is not the best thing and sometimes feels out of place, but luckily those tunes are overshadowed by the sound of the action for most parts.

If you were to do it all there's probably over 70 hours worth of content, but most of that is challenges that not everyone might want to perfect all the way to 5 Gears and lots of locations to be liberated, as for the story alone, the missions themselves could probably be completed in a few hours, but since most require areas to be liberated, it will take anywhere from 20 hours to 40 hours to complete the game.

There's no multiplayer, but there is a feature that allows you to challenge friends to beat your scores in a Feat and the achievements, collectibles and the never ending open-world sandbox will provide enough content for any player to stay busy in the world of Just Cause 3. Once completed, the game also has a reopress option that allows you to reload bases and enemies in an area that you have already liberated in case you're still looking for more or want to unlock the rest of the achievements without starting a new playthrough.

Just Cause 3 is a fun game to play and if you're looking for things to blow up you should look no forward, as the third installment improves on every aspect of its predecessors, resulting in a huge map filled with things to do, which could still use some variety, but in small doses Just Cause 3 is simply a blast.