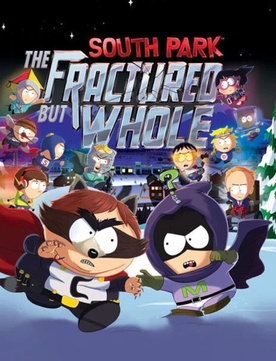 Building on 2014's The Stick of Truth, South Park: The Fractured But Whole offers a brand new adventure in the South Park universe filled with familiar locations, references to the TV show and the trademark South Park humor. Moving on from the fantasy realm of Humans vs Elves plot in The Stick of Truth, the sequel expands on the superhero theme previously introduced in Season 13 of the TV show with a parody of the Marvel vs DC superheroes franchises, all crafted in the typical South Park style, with each kid taking on a different superhero persona as they transform the entire town into their playground, with everyone in South Park getting involved in the story in some way. You once again take the role of the speechless new kid on the block as your family has recently moved to the small town of South Park, trying to gain followers in order to become more popular and spread your superhero franchise to new heights.

As this is South Park, it won't take long for the story to move into hilariously unexpected scenarios involving Morgan Freeman, Crab People, drunk adults, mutants and of course Butters as his Professor Chaos persona. Even though in length The Fractured But Whole is similar to The Stick of Truth, taking around 15-20 hours to finish the main story, with up to a few more hours of side content, there are fewer locations to explore overall, as most buildings have been simply been ported over here, and there are only a couple of new smaller locations to explore, while others have been completely removed, such as the entire Canada story arc from The Stick of Truth. Nonetheless, there are still items and collectibles to find, encouraging you to explore each building; on top of that most rooms have been redecorated at least partially with some newer references to the show, so even if the locations are the same, there are enough updates to the map design to make exploring South Park as intriguing as it first was in The Stick of Truth.

When it comes to the jokes and the humor itself, fart jokes are still a major part of it, as well as other long running jokes from the show such as the over the top PC-ness overlooking the community, incompetent and racist cops, pedophile priests and of course Kanye West. However by far most of the jokes are concentrated around the Marvel vs DC superhero battle with various references to movies, streaming services and the way superhero franchises work, which definitely fit the whole concept of the game, while still leaving the whole town of South Park open for more exploration leading to side quests, treasures and Easter Eggs. If you are expecting the main story to actually make some sense by the end of the game you should definitely lower your expectations because everything you see is simply made for the sake of humor and having fun with the whole superhero concept, but leaving the smaller jokes aside some of the main missions lead to simply hilarious conclusions, worthy of the South Park universe.

The biggest change to the Stick of Truth formula is the combat mechanic, which now allows you and your team, as well as your enemies to walk around the playfield, which is divided into multiple rows and columns, which vary from battle to battle and even better add new twists in the second half of the game with things like objectives and boss battles. The best part about this remade combat system is that it feels easy to get into and completely understand, while still leaving room for improvement and different strategies if you're looking for that extra challenge on the harder difficulty levels. Each character has a turn, with occasional ally, as well as enemy skills that can temporarily give you, an ally or an enemy an extra turn; similar to the previous game you control your own character as well as 3 other interchangeable allies, each with its unique set of moves including buffs, heals as well as damage skills that cover different area sizes.

In addition to those each character has an ultimate skill that can be used once the ultimate bar at the top of the screen reaches 100%, as well as the fart special skills that your character can use to cancel an enemy turn, go into free damage mode for a short period of time or change the time of day exposing different weaknesses some characters might have. Items also play a huge part as not only can you use revival potions, as well as health potions, but you can also use different summons as they are unlocked by progressing through the story, each having a different impact on the battlefield, with the Moses summon healing all your allies, while on the other hand the Ned and Jimbo summon can be used to deal significant damage to a wide area.

Aside from the turn based combat mechanic, you will spend the rest of your time exploring as well as solving puzzles using your ally abilities to lift objects blocking your way or reach new previously inaccessible areas, but most of those have an obvious solution and having to watch the ally summon animation every time you use one of them does get repetitive by the end of the game. There are also a bunch of minigames including the toilet mastery game that is a fun distraction from the story, but there was definitely room for more variety when it comes to the side content.

The reason why The Stick of Truth did better with fans than any previous attempt at making a South Park game was because it truly felt like a long season of the TV show, with each location and character staying true to its show roots and The Fractured But Whole is no different. Similar to how kids decorated the entire town to fit their Elves vs Humans theme, the town is now filled with references to the whole superheroes competition, as well as many other references to other episodes.

The game takes that short story about the kids playing superheroes back in Season 13 and expands it into a full season of South Park, with a longer story, more jokes and the freedom of discovery as you explore each corner of South Park. The only disappointment is that as mentioned before, many of the locations have been straight up copied from the Stick of Truth and there are not that many new locations made exclusively for this game, unless you also buy the Season Pass which adds a couple more buildings and quests; even with the fact that the game wants to stay true to the map of South Park as it was first designed, there was definitely room for more buildings and areas without messing with the town of South Park as it always was.

Matt Stone, Trey Parker and April Stewart are all here to voice their characters from the TV show and the whole thing sounds just as good as it looks, with the voices as well as the dialogue feeling authentic to the world of South Park. Additional voice actors have been cast to voice the huge cast of characters living in South Park, but aside from the main kids and their parents, most NPCs have only one or two lines of dialogue that they will repeat every time you interact with them. Sound effects are what you would expect, with each skill having unique effects and each fart sounding more powerful than the previous one.

The soundtrack includes some of the most popular songs featured on the show, including Randy's Lorde songs as well as some other fan favorites; on top of that there are many new tracks made precisely for the theme of the game, having a superhero vibe to them and providing a nice background tune to your epic battles.

The main story takes around 15-20 hours to complete, with up to 5-10 more hours worth of side content, but compared to the Stick of Truth where you could choose between 2 different sides giving you a reason to replay the game a second time, here the story will progressively unlock more characters from both factions, so unless you want to test your skills on a harder difficulty level there's no incentive to replay the game a second time.

South Park: The Fractured But Whole is probably what most of us expected from it after playing The Stick of Truth, with more jokes, a brand new theme for the story and countless references to the TV show. The brand new combat mechanic is a welcome addition that gives an interesting strategy point to combat and the characters are as charming and funny as ever, so once again if you like South Park you will most likely enjoy this game.