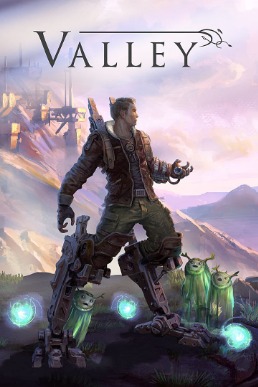 Valley takes place, as the title denotes, in a valley long abandoned since the days of WW2, where the US government was previously developing and testing alternatives for the Atomic Bomb, leading to various technological discoveries including the LEAF suit that allows you to run faster, jump higher and later on in the game even walk on water or magnetic walls. As fun as that sounds some of those mechanics are rarely used and if you came in here hoping those movements and powers would be chained together in a perfect parkour platforming challenge you will be disappointed because they are often interrupted by slow exploration sections and combat moments that feel unnecessary most of the times.

The story while briefly glossed over does make sense and does answer all the existential questions that come with it such as an explanation for your ability to respawn by tapping into the life of the valley, but the focus is mainly on the experiments that took place during WW2 and the aftermath of what happened there, leaving you as the player interacting with it outside the loop and not defining your role in it, which is why your character doesn't even have a name; in that regard it's more of an unraveling of past events, even though the action takes place in the present. Not to say that it's particularly weak in any way since reading the documents scattered across the world does uncover some interesting things about the experiments that took place in the valley and partially touches on the fears of the war and the isolation that came with the teams working on those projects in secret from the rest of the world, but at the same time there are many areas and objects that you would normally expect to lead to a side quest, a secret or an Easter Egg, all of which lead to absolutely nothing as the main story is all there is, leaving you with a sense of disappointment if you were expecting to live in the Valley for a little bit longer and uncover every mystery.

Another reason for why the story feels forgettable is the fact that characters aren't defined or personalized, which makes it hard to feel anything for all those people that supposedly risked their life to develop those technologies because whenever you bump into another document or a recording mentioning a name the game almost never repeats it a second time, apart from the person in charge of the project, whose name I still can't remember, despite the fact that probably his documents are the most common, so if anything that shows how badly those characters are presented, as the writing focuses more on being accurate to the other WW2 developments and hypothetical deadlines for the projects instead of presenting an actual cast of characters that lived in the valley for years. Not only will you have to read every single document to understand what those characters were doing, but even after doing so it's still a very brief resume of what happened, without adding much more background or character information; on top of that you will have to find them first since most of those documents are not on the main path.

Each time you gain a new ability for the LEAF suit it feels like you're getting a superpower and while the game shows you the use for that superpower the action can be quite entertaining; the first time you gain the ability to skip over water for a short period of time or the first time you find out you can now climb metallic walls are truly unique moments that feel like the discovery of that ability will lead to more great gameplay and fun movements, but unfortunately they only do for a short period of time. Each ability is used only in specific sections like the walking on rails for extra speed ability that is only used in a short indoors level where the action is often put to a halt due to a tight corner where you cannot turn at that speed or the walking on water ability that is only used on the island level. Instead of using each ability to build upon the foundations of gameplay and turn up the maneuvering and platforming up a notch each level by combing different abilities, the game instead throws away each mechanic once it's done with it and goes back to basics and another boring combat section.

In addition to exploring the outdoors and climbing hills, you will spend a lot of time indoors exploring abandoned factories, moment when the fast paced gameplay takes a turn in favor of exploration and slow combat. This wouldn't be a problem if those sections were interesting in their own way, but they are not, most of the times you will have to slowly make your way through each grey-looking monotone room while shooting at those dark creatures, which each die in 3 hits. Probably the biggest catch in Valley is the life-death mechanic that allows you to convert energy into life and vice versa, which means you can absorb the life from a tree or a deer and use it to shoot orbs at enemies, as each tree or animal drained gives you one energy bar, but since there are many generators scattered throughout the world I never felt the need to do that. In reverse, each time you die the valley loses a bit of health, but using energy you can inject life back into the trees and wildlife to restore it, however just like the drain ability this isn't used as much as you'd think simply because you will rarely die as the game barely poses a challenge and there are always generators nearby to replenish your energy.

Combat is by far the biggest disappointment in Valley and it always feels like something meant to put the fast paced action to a temporary stop instead of something fun, as there are only 2 types of enemies and they both die the same way, by hitting them 3 times with your energy orbs, which really isn't hard to do. Even when cornered between a bunch of dark creatures, you can always head towards a generator if you get low on energy to avoid dying, so unless you really try to, dying feels like something optional, which is a disappointment since that makes the game's most intriguing mechanic inconsequential.

If you know a little bit about game engines you know that Unity is not the most powerful beast when it comes to graphics, but it does open up the gates for indie developers to create games on a limited budget, which is exactly what developer Blue Isle Studios, previously known for their work on Slender: The Arrival, did here. There's nothing breathtaking in Valley's graphics or design, as a matter of fact a lot of areas feel empty and unpolished, but that doesn't mean the graphics are necessarily bad as the overall quality is average and the various environments outdoors make it feel like a genuine location, but for a place that was supposedly inhabited by hundreds of people decades ago, there are definitely quite a lot of details and items seemingly absent from the environment.

Just like the graphics, don't expect anything mindblowing here, but the sound effects match the action on screen quite well and the soundtrack does provide a very relaxing tune for most parts, with some more energetic tracks playing through key moments in the story. While a lot of the story is only in writing, there is occasional voice acting when it comes to voice recordings, as well as teaching you the mechanics of the game as each new power has a video presentation similar to those in Bioshock or Fallout.

It takes anywhere from six to eight hours to complete the game, add a few more if you want to revisit some locations for collectibles and upgrades in order to unlock all achievements, but with such a big map in each level it still feels like a lot of it is left unused, as there are no side quests or secrets and a lot of collectibles are just a bit off the main path, although easy to miss if you don't know exactly what you're looking for.

There is only one ending and no choices on how the plot unfolds so replaying the whole game a second time might not be worth it for a lot of people, but if the core idea seems interesting to you and you go in not expecting too much, Valley can still be quite an enjoyable short experience, especially if you get this for a low price during a sale.

Valley introduces an intriguing world and story, alongside the life-death mechanic that could've lead to something special here, but sadly the monotone and easy combat stands in the way of that mechanic reaching its full potential. It feels like this game's promise reached far beyond what the developers could accomplish here and that's what took Valley down this path, but if you're looking for a short game with some interesting parts and lots of filler, this game might be worth a shot for you.