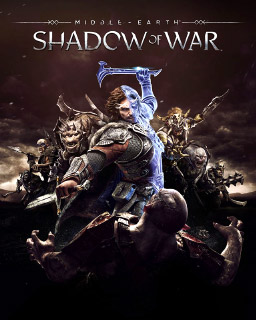 Middle Earth: Shadow of War picks up where Shadow of Mordor left off, following the adventures of Talion embodied with the spirit of the elf Celebrimbor, as they travel to Mount Doom in order to forge a new Ring of Power. Upon their return they find out that Minas Ithil is under siege by Sauron's forces looking to get their hands on the powerful artifact known as the Palantir, so they once again start a new journey across Mordor, killing orcs and taking fortresses along the way. Without expanding too much on the story for the sake of not spoiling anything, there are quite a few popular Tolkien characters integrated into the plot, including Gollum, the giant spider Shelob as well as a cast of Gondorian generals and the Nazgûl, all of which stay true to their personalities and appearances from the books and the movies. While on the topic of staying true to the books, if you are a dedicated fan of Lord of the Rings lore you might notice some inconsistencies with the world regarding event timelines and a few details, but keep in mind that the Middle Earth video game series has nothing to do with the other Lord of the Rings projects apart from sharing the same root source, Tolkien's books.

If you haven't played Shadow of Mordor, I highly recommend picking up that one first as not only is there a valuable story that helps you better understand this continuation, but it's also a more simplistic introduction to the nemesis system and the Middle Earth universe in Monolith's vision. That being said, you can just pick this one up without any knowledge of the previous game and still have a fun time and enjoy the narrative, as it is very clearly explained from the start and follows a liniar path from the beginning to the end when it comes to the main Gondor Quests, but expanding on that with a bunch of other quests which I would like to refrain myself from calling side quests because they are just as masterfully crafted and just as valuable to the overall story as the Gondor Quests, each type following a different style. Bruz Quests are more comically filled moments, following the adventures of the orc Bruz in his relationship with Talion while on the other hand Eltariel Quests are a more mystical take, showcasing the relationship between Talion and Eltariel which is continued in the DLC Blade of Galadriel. However my favorites were by far the Carnan Quests which embrace the fantasy of Tolkien's universe in full form, leading to some of the most breathtaking moments in the game, including a battle with the Balrog.

In terms of gameplay not much has changed since Shadow of Mordor, but that isn't a bad thing because combat in the original was nearly refined to perfection and a perfect fit for this style of game, so while the basics remain the same, Shadow of War builds upon them with a few tweaks and improvements. New enemies like the Nazgûl open up new combat techniques as they are stronger and faster than your normal orcs, while more complex battles require various tactics and taking control of other creatures such as drakes, once again the Balrog battle is a perfect example for this, but sadly it is among the very few that could be categorized as boss battles. While the main orc traits mechanic is still here it has been upgraded with more traits, making gathering information on a warchief or overlord before facing him essential if you want to make the battle easier on yourself; alternatively you can try to hit him with everything until you figure out his weakness.

The nemesis system first introduced in Shadow of Mordor has also been improved with more orc traits, skills and activities which will appear on the world map according to different scenarios, for example dying to any orc will trigger a Vendetta Mission, while ordering one of your orcs to attack another will trigger a Fight Pit. In addition to those fight pits that you can trigger by challenging another orc, there are a couple of predefined Fight Pits that unlock a new ability once you have completed all of them, but out of all the side content available in the game those are by far the least interesting as you don't even get to play the game, instead you get to choose one of your orcs which can be leveled up and equipped with different traits and send him to fight against an enemy orc while you watch the whole thing unable to intervene; it's also not an entertaining thing to watch as the battles are often plagued by horrid animations and weird movements.

One of the most interesting concepts of the game is the fortress defense and fortress capture systems, but those will overstay their welcome by the end of the game, as in order to see the real ending you have to go through a lengthy questline that requires you to defend each of the captured fortresses against enemy invasions, which often means you have to farm for gold if you haven't gathered enough up to that point in order to level up your orcs and equip them with stronger traits to make the whole thing easier. There is also an Online Conquest mode where you can do the same thing capturing other players' fortresses, but after being forced to do those types of missions a dozen times in that final part, jumping online to do the same thing is the last thing I wanted to do.

There are obviously graphical and engine improvements since 2014's Shadow of Mordor, but the style as well as overall look of the environment is mostly the same, not to say that is a bad thing since across Mordor you will encounter all types of different environments from snowy mountains to sandy deserts and there are different beasts that only appear in a specific area. The interface is a big step up from the previous installment as you can now upgrade gear and set on the next objective more easily without having to go through too many menus.

The animations although not perfect have also been improved and orcs now have more personality as they will remember previous battles and come up with different lines of dialogue depending on the situation. There are also quite a few different orc personalities, so many that even after dozens of hours of dominating and killing orcs you may still encounter a face and a voice you've never bumped into before, which makes me wish you could interact more with them after they've joined your army.

The dialogue is top notch and the actors do a fantastic job making their lines feel like a genuine conversation that could take place in Tolkien's universe; add on that with top of line sound effects and a soundtrack that fits the atmosphere of the game perfectly and you have a game that immerses you in the world of Middle Earth. The biggest surprise is the quantity of different dialogue lines that have been recorded for different situations where you encounter orcs you've battled before and either won or lost, multiply that by the many dozens different orc personalities and you have quite a cast of realistic sounding orcs.

It takes around 25 hours to complete the main game with the side content adding another 30 if you're down for every side quest and collectible, but the DLC adds even more to that and is something that I highly recommend you to pick up with the main game. While the Blade of Galadriel is more story-focused, following the adventures of Galadriel after the main story reaches its conclusion, the Desolation of Mordor DLC takes a more arcade approach, challenging you to capture the fortress of Shindrâm as quickly as possible for a gold rating, while still leaving the option for a more relaxed playthrough with unlockable upgrades and other smaller activities.

Shadow of War is a worthy sequel to a fantastic game set in the world of Middle Earth, expanding on almost every mechanic from the first game and moving the story forward in an interesting way. As a third person open world adventure game there is definitely room for more when it comes to fully immersing the player into the world of Middle Earth, but that shouldn't stop you from experiencing this gem.