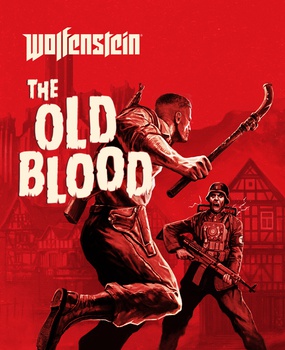 Wolfenstein: The Old Blood serves as a prequel to 2014's amazing franchise reboot, Wolfenstein: The New Order, following the adventures of B.J. Blazkowicz as he tries to uncover the location of Deathshead's compound which then kicks off the story of The New Order. While it isn't a mandatory necessity to the overall story-arc in the new Wolfenstein series of games, it does provide more background story to BJ's personality in the new games and includes a bunch of quite cleverly developed side characters which may be surprising considering the length of the campaign. The prime example of that character development is the main villain of the game, Helga von Schabbs, a Nazi Lieutenant obsessed with artifacts and weaponry that could aid the nazis in winning the war, a character that is introduced early in the game in a section that I will not spoil, to then be mentioned multiple times by other characters in different scenarios and ultimately leading to the face-off in the final mission.

On the opposing side to the villain are your allies, which are briefly introduced during a mission and then quickly disposed of in a sequence that takes place in the second half of the game where you must choose who to save in a dangerous situation, but since your time spent with them is so short, it's hard to care about either one of them and make a decision that genuinely feels like a tense moment in the story and instead you're left with just another basic moment in the action packed campaign that is The Old Blood. The action slows down even further during the final missions when Nazis will be replaced by zombie nazis in a quick turnaround that you might not expect, switching from intelligent AI that uses cover in a smart way and enemies split up to flank you to mindless bullet spongy zombies that die with a single well placed bullet even on the higher difficulties. That would be okay if there was some plot logic behind it, and while there is an explanation for the zombies, the short version is that someone activated an artifact that turned everyone around it into zombies and that's pretty much it, although you are never near the artifact or witness how that happened in any way; it just feels like they wanted to add zombies in the game and put the first thought that popped into their heads as the catalyst for that introduction instead of crafting a plot evolution that leads to that conclusion.

During the 6-8 hours it takes to finish the campaign you will visit quite a few different locations and find yourself in a vast number of interesting and action packed situations as the game never dwells on a style of play for too long, as it flawlessly combines stealth moments with action packed killing sprees, however just like in the previous game stealth is optional and going in guns blazing is always an option. One thing that I personally loved in The New Order was the perk system, which unlocked new abilities based on challenges like killing a given number of nazis with one weapon or overcharging your health up to 250 and that system is back here with some new perks and some new challenges scattered along some of the existing ones from The New Order. This once again encourages you to try out different playstyles, weapons and most likely replay the campaign a second time if you want to unlock them all, which is further supported by the collectibles, higher difficulties and that one mission that has 2 outcomes mentioned earlier.

When it comes to weapons you still have your pistols, SMGs and assault rifles, all of which can be double wielded just like in the previous game, with the newly added weapons adding on top of that. The Kampfpistole shoots explosive rounds, making it ideal for disposing of multiple enemies standing near one another, while the Bombenschuss serves as a high caliber sniper rifle that comes in handy against super soldiers, but it can also just used to score some headshots from a distance on regular nazis. Speaking of scores, your main attraction aside from the actual story campaign is the challenge mode which will unlock a new map for every mission completed in the campaign and tasks you with scoring combos and headshots in a small portion of that mission in order to unlock the highest medal rankings. While this probably won't be a time draining mode for most people, since it's just portions of the main story cut off in different challenges and the only difference is the score board in the left top corner of the screen, I would say it's worth a try even if you won't end up sticking all the way to the end unlocking the gold medal for each map.

The Old Blood doesn't look that much different from The New Order, mostly because it's built using the same engine and reuses a lot of textures from the previous game, but the locations are all new, so even if the color scheme in an area or a building will seem familiar you should know that all levels are designed from scratch and in many missions there are long side paths that lead to a collectible or the nightmare level, so exploration is highly encouraged. The character models are similar but look amazing nonetheless and the effects shine through especially in the zombie section where fire and explosions will be omnipresent. While I have seen some weird enemy animations, I haven't encountered any serious visual glitches and the cutscenes are incredibly well done.

Brian Bloom is once again reprising his role as B.J. Blazkowicz, with Gabrielle Scharnitzky taking on the role of Helga Von Schabbs, and just like in the previous game both English and German is used in dialogue and while there aren't that many conversations between characters compared to The New Order, mostly because of the story's limited run time, the lines that are there are concise and masterfully written and recorded by the actors. The audio effects are what you would expect from Wolfenstein, with many reused from The New Order, but they still fit the atmosphere of this game regardless.

It takes up to 8 hours to complete the campaign, but there are plenty of reasons to replay it a second time and the challenge mode can keep you around for a few more hours if you're willing to shoot for gold and unlock all achievements. Playing on ÜBER can provide a challenge for people looking to master this game, but unlike The New Order the enigma codes element is missing here.

If you were a fan of Wolfenstein: The New Order, The Old Blood is more of that with a new coat of paint, a prequel story and more nazi killing fun. If that is what you're looking for, this is a must play for any Wolfenstein fan and a very entertaining shooter overall.