[PC] Pac-Man and the Ghostly Adventures 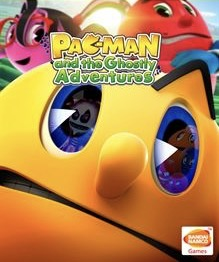 Pac-Man is undoubtedly one of the most popular video games franchises worldwide with dozens of entries in the series, making the yellow ghost eating creature famous across all platforms, age groups and regions. Pac-Man and the Ghostly Adventures is yet another attempt to bring the classic character into the 3D modern video games age, inspired by previous 3D platformers that came before it and integrating some of those elements into the world of Pac-Man. In this game Pac-Man takes on multiple forms including Ice-Pac, Fire-Pac and Metal-Pac just to name a few, each one of them changing Pac-Man's base abilities with an additional power, allowing you to climb metallic structures, beat fire with ice and ice with fire. It's a very basic elemental game where each ability nullifies another enemy's ability, in addition to some which are used for platforming challenges such as Chameleon-Pac's ability to extend his tongue and grab onto different swings across the stage in order to reach new areas.

The game starts in Pacopolis, Pac-Man's home world which has been attacked by ghosts, leaving you to clean up house and find out who was behind the attack. This journey takes you across different worlds with different themes, but considering two of those are continuation of previous themes and each world has only around 5-7 levels each, the game is quite short, but also gets repetitive really fast due to similar thematics and design repetitions. The story is pretty much what you would expect from such a game, with only a few lines of dialogue in the entire game and an ending that is predictable from the first world, similar to any other mascot-based platformers. However, where other platformers like the Super Mario series use the environment and the events happening in each world to tell a tale and put a smile on your face, Pac-Man has a very basic presentation, with each level and world feeling like a simulation to test you instead of a world meant to explore and solve. The characters are also quite bland and lacking personality, after finishing the game 2 times I still couldn't tell you what any of Pac-Man's friends names are, just because they briefly appear during a cutscene that you probably won't care too much about, and then you're back to another level without any continuation or progress in the story.

Pac-Man and the Ghostly Adventures is still a fun game to play, especially for the game's target audience: kids, because it's easy to learn, has short levels that can each be finished in a 10-15 minutes break and the difficulty isn't that high to begin with, even though you will die quite a few times, especially in some sections where how to proceed forward isn't precisely clear and you have to attempt different things before finding out the right way forward. This once again showcases the fact that there's only one solution to each challenge and there is little room for experimentation, each section of a level is designed with one form of Pac-Man in mind, and even if you could get with another power active to that area, getting past it with another form of Pac-Man is impossible most of the times. Combat is limited to pressing X when near a ghost to eat it, with the catch being that some ghosts require a certain form of Pac-Man to eat them, but considering the fact that there's always a power-up near ghosts, it's nearly impossible to fail during combat, instead the way you die is by either missing a platform during a jump or not understanding where you're supposed to jump and missing that way. The villains and bosses are also basic, with the one exception being the Chef, which is probably also the most challenging battle in the entire game.

This game is in a way a precursor to Super Mario Odyssey before that game was even in development, but where Odyssey uses each new form of Mario to add to the vast array of abilities available from the start and give you multiple paths to solve a puzzle, Pac-Man is very basic and throws each ability out the window once the map is done with it, switching it up with a new one and eliminating that feel of experimentation where multiple solutions exist. The level design is pretty straight forward, you take one form of Pac-Man and use it to advance past one area, to then switch to another one since the level ahead was designed with that one power in mind and using that exact power to advance. The game also does a terrible job of spacing those sections throughout the game, as for a long stretch of a few levels you will bump into only 2 or 3 different powers, leaving forms like Metal-Pac used for only a select number of levels in the game.

Aside from the campaign itself, there are four additional minigames that you can play using the coins collected during the campaign, and while each one of them comes with its own fun, they do get boring quite fast, so you can either push for a high score to get the achievement for each one of them or give up and never play them again. There is also a multiplayer mode for up to four people that can be played either locally or via Remote Play Together, but this will probably keep you around for less than the arcade minigames will, since it lacks content and gets boring in a matter of minutes. In this mode each player takes control of a ghost trying to eliminate Pac-Man and have the highest score at the end, but that's pretty much all there is to it and there are only a few maps on which you can play this mode, so even if your kids might enjoy it, it won't last a long time; on top of that the level design for those maps is terrible.

The game looks like how you would imagine a 3D Pac-Man game, with colorful areas and a cartoon-ish look, which serves this style of game right, but seeing past the basic level design, it's impossible not to notice how empty those levels are, aside from the objects that you can interact with, the decor is almost absent everywhere. There is also a lot of repetition and textures used for multiple levels in a row, but my biggest problem with the level design is the fact that in many cases the end of the play area is not clearly marked, so I ended up jumping to my death a couple of times thinking I would be able to land on that one platform below that is actually just part of the background, and if I had that issue I can only imagine how much this would be a problem for kids who aren't used to how older platformers worked.

Pac-Man sounds exactly how you remember him from the arcade games, with many effects improved and added to that of course, the voice acting on the other hand can be cringy at times. Let's elaborate a bit on Pac-Man's voice since it's not how I expected Pac-Man to speak as the voice work is done by a woman by the name of Erica Mendez; at first I thought this was because they recruited the same actors from the TV show with the same name, but that isn't the case since all characters have different voice actors. I guess the point here was to make Pac-Man sound like a 10 year old so he would appeal to kids, but to someone who knows Pac-Man as this video game character who is now over 40 years old, that just doesn't sound right.

To be clear, Pac-Man's voice does not affect my rating of this game because I understand this is a game mainly for kids, and speaking of that, the soundtrack does a fantastic job keeping an upbeat with the level design and coming up with some catchy tunes at times that I am sure kids will dig and want to listen to again, because there are no lyrics, just pure joyful music in the style of other 3D platformers that came before it.

As an adult you can probably finish the entire game in around 5 hours, but the game wants you to replay the campaign a second time since there are coins to collect and bonus levels to unlock and complete, although only a few of them which are much shorter than the normal levels. On top of that you have the arcade minigames that might keep you around for a few more hours if you want to reach that high score and the multiplayer mode which probably no one will bother with, but it's there if you want to try it.

Pac-Man and the Ghostly Adventures is a game made mainly for kids, the same people that are watching the now cancelled TV show with the same name and like following the adventures of Pac-Man. As a video game it's fun and works well enough to provide entertainment for a few hours even if you are an adult, but it fails to expand on its base premise and platforming challenges to create a world that you want to revisit and be in. If you are looking for games your kid could play, this one might be what you're looking for, but if you like 3D platformers yourself and you're looking for something new, you are probably better off somewhere else like the 3D Super Mario series.