[PC] Batman: The Enemy Within 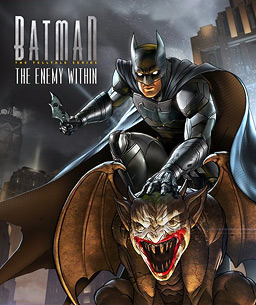 Batman: The Enemy Within or Batman: The Telltale Series Season 2 as it should be called is a direct continuation of the previous game by Telltale, following Bruce Wayne in his struggle to keep Gotham safe from the many villains trying to take over. Compared to the previous season, The Enemy Within has a more vast cast of characters and especially villains, with whom Bruce Wayne will interact with not only as Batman, but also as himself, as Bruce's friendship with John Doe continues this season, on a lower or higher note depending on your relationship with him at the end of Season 1. Joining him are other popular DC villains such as The Riddler, Bane, Mr. Freeze & Harley Quinn, all of which have a personality and an objective, continuing the trend from the previous season where villains are not just punching bags as they are usually portrayed in other Batman video games and movies, but ultimately have a motive behind their actions, which is gradually revealed as the game unfolds and you interact more with each one of them.

This might be a personal choice, but the story has way more charm and intrigue this season than the previous installment and there's always that moment of suspense at the end of each episode making you eager to see what's going to happen next, a conclusion that always delivers the unexpected. In addition to the villains, joining the cast of characters is the Agency's Amanda Waller, a shady character with shady motives that finds herself in a conflict with James Gordon about who should be the authority in Gotham during a period of turmoil and unrest with so many villains loose on the streets of Gotham. Piecing all of those elements together as the story moves forward is what makes The Enemy Within such a powerful story worth following, never knowing who is going to betray you and whose trust you might have to betray for the greater good.

Just like the previous season, there are many different paths and optional scenes depending on your choices, although similar to the previous game some of those are forced on you in order to set up the next episode. On top of the decisions you make this season some of the decisions from the previous game carry over, such as character injuries which are permanent and give you the impression that your decisions truly mattered and affected the characters around you. Another thing that this season does differently is the portrayal of Bruce Wayne as a capable fighter, as those moments are no longer limited to his executive billionaire time. Instead Bruce decides in many instances that going in as himself might be a better option even if it will require to get his hands dirty; all of this makes sense from a plot perspective too, but I will let you discover how for yourself.

Gameplay-wise The Enemy Within is mostly the same, with quick time events still covering a huge chunk of the playtime, leaving the rest to dialogue which is done in a similar manner and exploration sections with the occasional puzzles. One thing that has changed is the UI for those QTE, as directions are displayed differently and overall the UI looks more polished in contrast to the action on the screen, which also solves some visibility issues present in a lot of Telltale games where an action prompt appears quickly in a place of the screen you did not expect, causing you to miss the time interval in which you're supposed to react. Also similarly, a lot of those action packed moments are toned down by the fact that they all use QTE as a gameplay mechanic, so even something as epic as fighting multiple villains at a time doesn't feel as satisfying as it could since all you have to do is use the left stick to dodge in the right direction and press a single button to attack, unable to miss.

Once again this is a game mainly focused on story, leaving gameplay to a second place as some tense moments barely require any input at all, making them more like a comic book version of a cutscene. The greatest part about it all is that you can end up in a multitude of different situations depending on your choices and responses, including befriending some villains, which is unusual for any superhero game. On top of that there are also optional romances and friendships that can go both ways depending on your actions as both Batman & Bruce Wayne, as well as that character's relation with either one of them. You could say this about any Telltale game, but I feel like The Enemy Within is worth at least another replay, as there are too many variables and ways to interact with characters, on top of the different endings that you can reach.

Graphically the game looks exactly like the previous season, keeping the comic book appeal intact and staying true to the character designs, especially when it comes to villains as they have distinct looks that will resonate with fans, while still keeping them human. The only adjustment made graphically is to the user interface and action prompts, making some of those easier to spot and overall better fitting the art style. Even with its pretty art style, some backgrounds are lacking details and visual effects could use an overhaul, but that applies to all Telltale games this generation, not just this one.

Luckily Troy Baker is still the voice of Batman and Bruce, which is for the best since his portrayal is one of the best I've heard in any Batman project, with all the other characters that were also included in the first season having the same voice actors this time around. As for the new characters, especially villains, Telltale has done a wonderful job picking out the right people for the role, with a special shout-out to Laura Post for her portrayal of Harley Quinn. The soundtrack is always on tone with the action and the effects, even though have mostly been carried over from the previous game, do the job well enough considering the tone and style of the game.

The Enemy Within is a bit longer than the previous season, although not by much as the average completion time is around 8 hours, but I feel like there's even more reasons to replay this one a second time due to the multiple paths and villains with whom you can build different types of relationships, which can end in different ways, all of which are satisfying if that is the path you want to stick with.

Batman: The Enemy Within is the second season of Telltale's take on Batman, that includes more villains and a much more intriguing story to follow, on top of the multiple decisions and paths that you can take, even though they ultimately lead to a similar conclusion. If you haven't played the first season, I highly recommend picking up that one first as this is a direct sequel and playing through that first will help you better understand this Batman universe in Telltale's eyes. If you liked that one, this is pretty much more of the same, but with a better story.

Users browsing this forum: No registered users and 6 guests