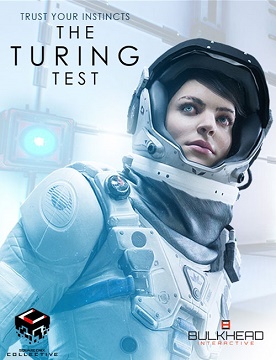 The Turing Test is a first person puzzle game inspired by the likes of Portal, using physics and logic to craft unique puzzles that gradually get more complex and difficult as you advance through the game. You play as Ava Turing, an International Space Agency engineer working at a research station located on Europa, moment when she is ordered to check on the scientists located on Jupiter's moon as they have apparently gone rogue. In order to prevent AI from entering the station, the ISA has set up a bunch of rooms called Turing Tests which are meant to test an individual's logic and problem solving skills in order to prove that they are human, and so your adventure begins. Each section is made up of one or more rooms that act as a single puzzle that you must solve in order to move on the next one and those form up the majority of the game, interrupted only by the story bits where normal habitable rooms exist.

The story is primarily told by just progressing through the game as Ava will constantly stay in touch with the on-board AI T.O.M. with whom you will have the majority of your conversations, getting into subjects of morality and purpose as he is constantly challenging you to prove to him what being human means. The narrative itself isn't at its best, but those conversations are the star of the show here, making you think about what the future of AI will bring and how some of those issues could influence humanity in the real world in the upcoming future. Without spoiling anything, the story does get more interesting in the second half, as those lonely conversations with T.O.M while solving puzzles will be replaced with more interactions and the uncertainty of how it's going to end.

You can understand the story completely by just progressing through the game and solving puzzles, but for those looking for an in-depth dive into its characters and the backstory of the station and its scientists before your arrival, there are many optional recordings, notes and messages that you can find and read to get a more broad perspective on what happened that led to this conclusion. Many of those are located in secret rooms unlocked by solving the optional puzzles, so the game rewards your curiosity and ability with more backstory.

The main element of the puzzles is redistributing power using your equipped tool which looks like a futuristic gun; this gun allows you to move power spheres between receptacles, allowing you to prioritize the devices you power and move those power spheres once they're no longer needed in a slot to another one, even from a distance. There are also multiple varieties of power spheres, with the blue ones acting as full permanent power as long as they are located in a receptacle and the green ones acting as an intermittent power source, which opens up many possibilities for puzzles. On top of the power spheres that you can move using your gun, there are also power cubes that you have to carry manually in order to place them in a slot, but since they are physical objects they can also be used as weight for pressure plates, which creates even more puzzle scenarios.

The game then combines all of those main elements with devices that need power in order to function such as stairs, doors, cameras, magnetic cranes and lifts, leading to some sections that feel genuinely innovative and smart, while still keeping the simplicity of each puzzle to something that you can figure out by yourself through trial and error, because most of the sections are pretty small in scale, so trying everything will eventually lead to a solution even if you can't figure it out at first. If you play puzzle games regularly the game might seem easy at least in the first half, but it does gradually get more complex as you reach the end, however it never goes over the edge as each new twist on the gameplay introduced in one section will only be used a few more times and is never iterated upon in a more complex manner, as instead the game prefers to combine more mechanics in the later half in order to achieve higher puzzle difficulty.

Where the puzzle complexity does get crazy is in the game's optional puzzles, some of those being genuinely difficult to solve, but rewarding your skills and curiosity with bonus rooms filled with additional notes and recordings that extend the base story past its basic premise, helping you better understand the plot and the daily lives of the crew aboard the station. Those exploration rooms are not exclusive to the optional puzzles, as they will also appear on the main path in order to progress the story and make you feel like you've reached an objective at the end of each chapter.

There are some sections in this game that look absolutely stunning, but those are always the exploration sections where you just have to walk to the other end without solving any puzzle. The puzzle rooms on the other hand are all similar looking, with metallic walls on all sides encasing the section, a few items and devices scattered across the room that serve as your points of interest. The graphics aren't bad, as each section is detailed and there are some incredible lighting effects bringing the station to life, but you will have to look at similar backgrounds for the majority of the game.

There are only a few characters in the entire game including your character Ava Turing voiced by Marie Westbrook and T.O.M voiced by James Faulkner just to name the most omnipresent voices, and they both do a fantastic job bringing their respective characters to life, with the rest of the side characters being the scientists on the station, but for most parts you will only hear their voices in recordings found on computers, although they do have a face and a personality attached to them that you can find out more about by solving those optional puzzles. The soundtrack is fantastic and fitting the theme of the game, with the sound effects of your gun and all the devices when turned on adding to that.

The game can be finished in around 8 hours with the optional puzzles included, if you've avoided those during your first playthrough you might want to give them a shot and since you can select in what section to start after finishing the game once you can play just those without having to go through the whole chapter again. Aside from that there is no replay value, but considering the price of the game, I'd say it's worth the money if you enjoy a good puzzle game, especially if it's on sale for only a few bucks.

The Turing Test is a logic based puzzle game with physics elements in the style of Portal, if that sounds appealing to you, this game will probably make you think and leave you wanting more of it. That one run is all you get as it usually is with puzzle games, but this is one of the best options on the market and guaranteed to provide you with a good time and many "ah-hah!" moments when you figure out how a puzzle is solved.