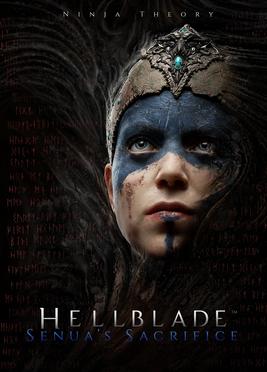 Hellblade: Senua's Sacrifice is a world of Norse mythology, combined with both fiction and non-fiction elements, centered around the main character's profound story in a struggle against love and mental illness while darkness awaits at every corner, exploiting your weaknesses in order to induct fear. The reason why that is such as remarkable achievement in storytelling is because Senua is not an easily deterred character, she is a warrior with determination and passion, as well as combat skills to aid her in her journey. Looking for her dead lover, she embarks on a journey to the mythological Norse land of the dead called Helheim where darkness rules the world and creatures of death will constantly try to break you down mentally before they even attempt do so in a physical way.

As you travel the world you will not only hear Senua's voice and comments that she says out loud, but also the voices inside her head, guiding and trying to deter her from the objective at the same time, and this creates a storytelling perspective that we've never seen before in a video game, understanding the character you control beyond what she expresses outside, as you have a look inside her inner mind as well, giving you a wider perspective of what is going through her head with each event happening in the story, as well as an example of what mentally ill people have to struggle with on a daily basis, and the game does that with such passion and attention to detail, that it's hard not to appreciate.

The story itself isn't the best tale you could make up, but what gives it depth is the understanding of each moment from inside Senua's mind, and while the ending might leave some people wanting a more conclusive finale dry, it's still a great middle ground to whatever is about to follow in the sequel. As for the vistas you'll get to visit throughout your journey, there is plenty to see and all of it is incredibly detailed and thought out, making exploring each corner of the world a mystery waiting to be solved, and while there aren't that many things to explore outside of the main objective, aside from the lorestone collectibles, I still felt like I wanted to explore every area thoroughly to see it all, even if it never led to another quest or more collectibles.

Gameplay-wise Hellblade is half puzzles, half combat with the puzzles focused on different angles of view; this mechanic is used with the glyph system where you must match a given symbol to objects in the world that when viewed from a specific angle resemble the symbol as well as the portals mechanic which changes elements in the world when you look through them, revealing a path that was previously blocked or opening a door that was locked. Using those elements alongside interactable objects the game creates puzzles around them which range in difficulty, but are never too over the top and even if you are stuck on something for a few minutes, looking around you will eventually reveal the element that you need to progress forward.

Combat is pretty basic, but punishing at the same time as it only takes a few hits to take Senua down, so blocking as well as dodging are mandatory, but there is enough time to react to each attack so the combat feels fluid and each time you die you can point exactly to the mistake you've made and try not to repeat it in the next try. Aside from blocking and dodging you have three types of attack, a fast strike, a heavy attack and a melee attack, but since the melee attack does no damage, the way it's used is a stun ability that opens up a safe way for you to land a few hits before the enemy regains conscience and starts moving again and hitting back. Some enemies however are immune to stuns so you will have to use dodge much more frequently to avoid their hits, but no matter how many times you fail, the checkpoint system makes retrying and learning from your mistakes easy as you can always give that specific instance another try since each time a battle starts the game will save.

The greatest thing about Hellblade's combat is that it doesn't tell you anything and you have to figure it out all by yourself, but by doing that you become better at it, it's one of those games where the tutorial is just playing the game normally and figuring stuff out as you make mistakes. On top of that there is no HUD, you never know how much health you have left, but you see Senua struggling as you get closer to death, so you take little details around you to keep track of different things, for instance there is no counter attack pop-up or warning when an enemy is about to hit you from behind, instead the voices inside Senua's head will shout things like "Watch out" or "Behind you" to warn you about incoming danger. Aside from combat and puzzles you have exploration which you may want to do a lot of since the world is simply breathtaking, but sadly the only collectibles are those lorestones scattered across the chapters, and there is no side content aside from the main story, so even if some areas look big enough to have plenty of things to do around, in reality they are there only for the beauty of the land and there isn't much else to it.

There is a moment at the start of the game where a cutscene introduces you to Senua's story and a few moments later the camera closes in on your character and just like that you are able to control Senua, for a moment there I could not believe the graphics showcased in the cutscene are the actual in-game graphics, not only because that transition made it so smooth, but also because the attention to detail and lighting effects are incredible.

Since this is not specifically an open world massive game, as each chapter will move you to a different area via cutscenes, developers were able to pay attention to the smallest details in every single area and it all looks incredible, especially when played on the highest settings where the shadows and lighting effects are just mind-blowing. On top of that there are no loading screens at all, at least on PC, so the whole game feels like a continuous story that never stops, only the action does during cutscenes but those in and out of game transitions are so smooth that it never feels like a different thing.

Using motion capture technology Melina Juergens has been brought to life inside the game as Senua and she does a fantastic job taking on the role, showcasing emotion and realism with every word and every move, which makes the whole illusion that Senua has to deal with that much more believable. Since there are only a few side characters the cast of voice actors isn't that big, with Oliver Walker taking on the role of Dillion just to name the most prominent in the story. The soundtrack is amazing and suiting the Norse thematic, with the right tune always playing during the right moment in the story, but the even more incredible aspect of Hellblade's audio are the sound effects and the voices inside Senua's head having different intonation and expression depending on the situation.

It takes around 8 hours to reach the end credits, but aside from the lorestone collectibles there is no reason to come back since the story is linear, however since the game is only half of a full retail game's price and the quality of production is absolutely insane this might be worth the full price easily if this is the type of game you're looking for, otherwise you might want to wait for a sale before picking it up, but regardless of the type of games you enjoy the most, Hellblade: Senua's Sacrifice is definitely an experience worth trying.

If you enjoy games with a profound story and don't mind puzzles in your games, Hellblade might be the next game for you, but even if it's not on your immediate radar, I would suggest giving it a try at some point because the game world might surprise you in a very pleasant way. The combat although enjoyable is limited to only a few encounters, but if you want an extra reason to give this game a try just look at a screenshot of the game on the highest settings and the graphics alone might catch your eye.