[PC/MAC/LINUX/STEAMOS] Day of the Tentacle Remastered 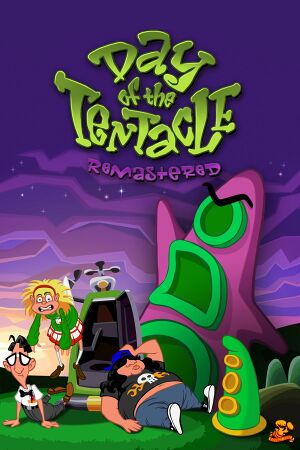 Day of the Tentacle Remastered is an overhaul of 1993's LucasArts classic, bringing this almost 3 decades old game to modern hardware with graphical and control improvements while still keeping the appeal and humor of the original untouched, something that is still worth experiencing today. If you've never played or heard of Day of the Tentacle, the original game itself is a sequel to 1987's Maniac Mansion which follows Bernard Bernoulli and his friends Hoagie and Laverne as they attempt to stop the world from being taken over by an evil tentacle. As the tentacle has already set his world domination plans in motion the trio decides to help Dr. Fred Edison, a scientist responsible for the creation of the tentacles, by going back in time to the day before it happens in order to stop it. As that being a success wouldn't set off the premise for an interesting plot spanning more than 5 minutes, the time machine malfunctions sending each character 200 years apart in time from one another, leaving Hoagie stuck in the past during the time of the US' founding fathers and sending Laverne 200 years into the future in a world where tentacles have become the dominant species and humans have been downgraded to being their pets, while leaving Bernard in the present.

By doing this the game spans three different timelines all of which take place in the same location, Dr Fred's mansion, which as you will find out is used for various things in the past and future depending on who inhabited it, but as it is the same location doing different things in one timeline will affect the outcome in another and based on that the game creates intriguing puzzles that require you to send items back and forth in time. Once you get past the introduction you will be able to switch between characters at will and while each timeline has puzzles of its own, many of them require you to pass items between characters using the Chron-o-Johns, which are toilets with the ability to transport items between timelines, allowing Bernard to send items to Hoagie or Laverne and the same thing in reverse for those characters. Each character has a quirky personality that fits the humorous tone of the game perfectly and sets up the stage for many jokes and references which are still funny and relevant today despite the game's age. There is a little bit of humor infused into every part of this game starting with dialogue that even though doesn't influence the outcome of conversations in any way, allows you to respond in various ways and ask other side characters outrageous questions that often lead to funny punchlines.

Humor is not only limited to dialogue as it extends into every aspect of the game including item interaction, with many optional interactions having funny outcomes, so trying different combinations that you think will lead to something hilarious often does, but at the same time Day of the Tentacle suffers from the same problem many other early LucasArts game have today, which is the fact that progressing forward is often paused by puzzles that make no sense and take hours to figure out without a guide, which is made even worse by the three timelines. If figuring out a puzzle in other LucasArts games like Full Throttle or Grim Fandango took a while because you had to travel between scenes and try every combination possible on each interactable item, here it will probably take you much longer to figure out your next move because you're never sure which character is supposed to make the next move and there's no hint system whatsoever in this remaster to help with that, so unless you're willing to spend hours trying everything until something clicks, using a guide will become inevitable at some point.

The interaction system has various options depending on the item you click on, as you can close and open doors, pull or push objects or more basic options like looking and using which are available on most items, but despite the many options you have when clicking on an object that is actually not the part that makes Day of the Tentacles' puzzles confusing because they often make sense from an approach perspective, instead the problem comes from the large variety of items that you can gather in each character's inventory and have to find a use for later on, but remember that you can send items between characters, so picking up an item with one character in one timeline doesn't necessarily mean you will use it there, so you never quite know what is supposed to be used where especially because just like any other early LucasArts games item interactions are often illogical. This is once again not a problem for people who have played the game previously or enjoy this constant exploration aspect for your next movement that clicks, but it will likely be a problem for players who aren't used to this methodology in game design and the remaster doesn't do anything to address that issue, which could've been fixed with a hint system. Even if you are generally good at puzzle games you will most likely end up looking up a guide at some point because the interactions required to progress forward are always something you wouldn't normally think of and the fact that you never know which timeline has to make the next move expands on that problem with more options than you might have the patience to try out.

Unlike some other games in the LucasArts portfolio, Day of the Tentacle never really had camera issues because despite using the same technique and camera system as some of the other titles, the scenes in this game are small in scale, with each room in the mansion being a different scene that you will transition to when you walk through a door, so the action feels smooth and fluid and passing items between characters is easily done using a single menu that opens up your entire inventory which has replaced the chaotic text based system of the original, allowing you to drag and drop items to the other character's icons to the right of the menu in order to send them. I have encountered some crashes that could've been caused by many reasons, but aside from that there are no bugs or glitches and the animation has been improved in this remaster, making cutscenes feel more fluid and closer to modern standards.

The graphics have been drastically improved, showcasing the true artistic direction the game was originally going for, but was limited by the early 90s hardware and if you want to compare there's also an option to switch between the remastered version and the original, which gives you a nice perspective on how modern non-pixelated design has such a big impact on the look of the game without omitting anything from what made the original so unique. While the characters and scenery have been reworked into something incredible the effects have received a somehow superficial overhaul with smoke effects for example looking better than the original, but still a bit off compared to the standard in modern visual effects.

All of the original actors are still here with Denny Delk taking on the roles of Hoagie, the tentacles and George Washington, while Jane Jacobs takes on the role of Laverne and Richard Sanders plays the role of Bernard and even though they haven't rerecorded their lines for the remaster, the work Double Fine has done on the audio side is enough to bring their voice work up to modern standards, but don't expect anything fancy like Dolby Digital or spatial audio. The soundtrack still hits the same highs it did back in '93, but just like everything else the tunes have been reworked to come as close as possible to modern standards; on the other side the effects range in quality, some seem to have been replaced or reworked while others seem neglected, but it's always something minor like the sound of a drawer opening.

If you knew what you were doing from top to bottom you could finish this game in less than 4 hours, but if you've never played this before and want to go through it without a guide you could spend much more than that just trying different item combinations in order to move forward and even with that in mind you might still give up at some point and look up a walkthrough regardless. There are some extras included with the remaster such as concept art and developer commentary, but those are mostly for fans of the original game who want to find out more about the game's development.

Day of the Tentacle Remaster is an amazing redesign of the 1993 classic which still stands tall today in terms of jokes and character design, but has been completely obliterated by the passage of time in terms of gameplay as players nowadays are used to always knowing what the objective is, something that may come as hurdle for anyone looking to get into this game now, but if you don't mind using a guide or spending many hours looking around trying different combinations, this game is still worth it for the humor and characters alone.